Congratulations to Shirley Gibson of Wilson, NC on being named the Southeastern Cotton Ginner of the Year for 2011. Ms. Gibson is a long-time member of the Association having served in many capacities over theyears. She currently serves as a Director and is the Chair of our Safety and Insurance Committee. Shirley started her career in the gin business 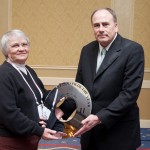 Shirley Gibson receives the 2011 Ginner of the Year award from Presiden Robbie Waters.

in 1954 with the Bethel Mfg. Company in Bethel, NC. The company made pallets and ginned cotton. The manager had many diverse interestsand knew he needed someone he could rely on so he trained Ms. Gibson to run things in his absence. She took that knowledge and ran the gin business for many years in Bethel later being recruited to work at a brand new gin that was being built in Ayden, NC. Following that, she worked at and later managed the Greene Gin in Snow Hill and for the past 10 seasons has managed the

Silver Lake Growers Gin. The Southeast Ginner of the Year is awarded by the Southeastern Cotton Ginners Association each year to a cotton ginner who is active in the Association, is progressive and endeavors to keep cotton strong in their community, has respect both in their community and with their peers, supportive of the cotton ginning industry generally and shows outstanding leadership. Ms. Gibson is the first woman to

receive the Ginner of the Year since the award was established in 1983. Ms. Shirley, as everyone knows her, was joined by her daughters Mahlonie Leggett and Pam Nisbet as she was presented with the award. The presentation was made during the Annual Meetings of the Southern Cotton Growers and Southeastern Cotton Ginners Association, Inc. commonly known as the Southern Southeastern Annual Meeting. Congratulations once again to Shirley B. Gibson of Wilson, NC… The Southeast Ginner of the Year for 2011.