Our industry lost one of its pioneers this week and unfortunately, many in the industry today never knew him. I consider myself as one of the lucky ones. Lambert Henry “Papa” Wilkes, passed away this week at 87 yrs young. Lambert was born in Blair, SC. He attended Clemson, then Texas A&M. He served his country in the Air Force and then went on to become a professor of Agricultural Engineering at A&M.

Professor Wilkes wrote many books, authored many papers as most professors do but he did something that truly revolutionized ginning. He and his team at A&M and Cotton Inc. 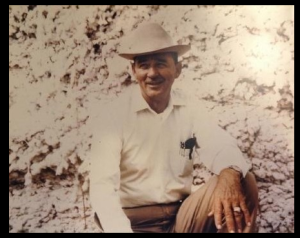 invented and perfected the module builder and module feeder system for storage and transportation of seed cotton.

Papa was a quiet man but you always knew where you stood. He retired from teaching in 1985 but had begun a project on a new way to gin cotton called the Cage Gin. It was in the testing and completion of that ginning system that I got to know Professor Wilkes. I only worked with him for a couple years before starting to work with the Texas Cotton Ginners Association, but I can tell you I worked harder and learned more about ginning and probably life or how to live than in any other job prior or since. I considered him a friend and mentor. He never forgot even after all those years.

I never really knew if he understood the impact of the module builder. Sure he got how it changed things but for such an important invention and innovation, he never mentioned its importance to anyone I’m aware of or the fact that he led the team that invented it. He was always humble like that.

In 2000, the state of Texas designated the invention of the Module Builder as one of the most significant events Texas during the 70’s along with little things like DFW airport and Southwest Airlines. In 2002 the American Society of Agricultural Engineers named the Module Builder as a landmark in agricultural engineering and a top three in cotton mechanization.

Anyone that ever ginned a whole season on trailers (not many of you left I imagine) can really appreciate the module builder. Anyone that ever met Papa Wilkes will miss the man that invented it and contributed so much to our industry.