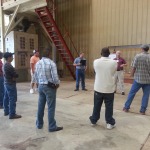 The 2014 Gnner Safety Round Table got nearly 200 ginners and key gin employees together for a few hours to discuss issues, swap war stories and generally talk safety.

The Round Table concept started two years ago when the AgriTrust of Georgia began looking for ways to improve safety in gins. Southeastern Cotton Ginners leadership worked with the AgriTrust to discuss what cold be done and as the conversation progressed, stories of how one ginner has solved a problem and the others picked up on it. This continued and it became apparent that the gin employees had the best experience of what to do and not to do to be safe. They were the ones that had seen their friends hurt or had figured out a better way to do things.

Southeastern’s Leadership and AgriTrust worked together to come up with a concept for bringing this to the key gin employees. These seem to be a success.

The first year of the round table (2012) we had nearly 100 ginners come to Tifton and broke them into 8 groups with each taking a different part of the gin. A facilitator would get the conversations started and let the group take the stories wherever they would go. The facilitators would write down key ideas.

In 2014 we held round tables in three locations, two in Georgia and one in Alabama, with nearly 200 gin employees attending.

This is not your typical safety meeting. Very little of the “rules and regs” are put out as gospel. It’s more along the lines of a discussion on how the right thing can be done. If there’s a better, safer way to do something, it tends to come out.

We look forward to how this evolves into the future