The USDA NASS released the latest Planting Intentions report this morning. This will likely be the last “estimated” acreage report for the Spring as planting has started in many areas or will start quite soon. Overall the USDA has the US at just under 13.2 million acres. This is well above consensus estimates of 12.74 million acres. It is, though, below the NCC estimate of 13.63 million acres that he USDA had published at its annual meeting in February. 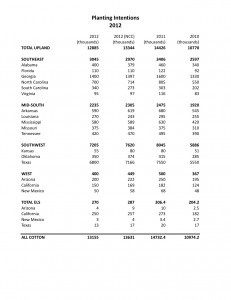 For the Southeast, The USDA is expecting 3.045million acres which is down from the 2011 final acreage number of 3.406 million. This is approximately a 11% reduction in acreage from last year. This is still 400 thousand or more acres more than the 2010 plantings for our region. Farmers in Alabama are expected to plant 400 thousand acres down from the 460 they planted in 2011. Florida farmers are looking at planting 110 thousand acres down about 10 percent from teh 122 thousand they planted in 2011. Georgia and North Carolina are looking at the largest acreage drops with 200 thousand an 100 thousand respectively. This translates to between 12 and 13 percent for each of them. South Carolina is expected to see a slight increase in acres again. This is the only state to see an increase  in the Southeast, based on the USDA survey, moving from 303 thousand acres in 2011 to 340 thousand in 2012.

This survey is based on farmers response to a survey conducted by NASS earlier this year. Market have been somewhat volatile during these months and actual acreage acreage report will be released in June. The full planting intentions report can be found at the NASS website. or you can download the report directly.